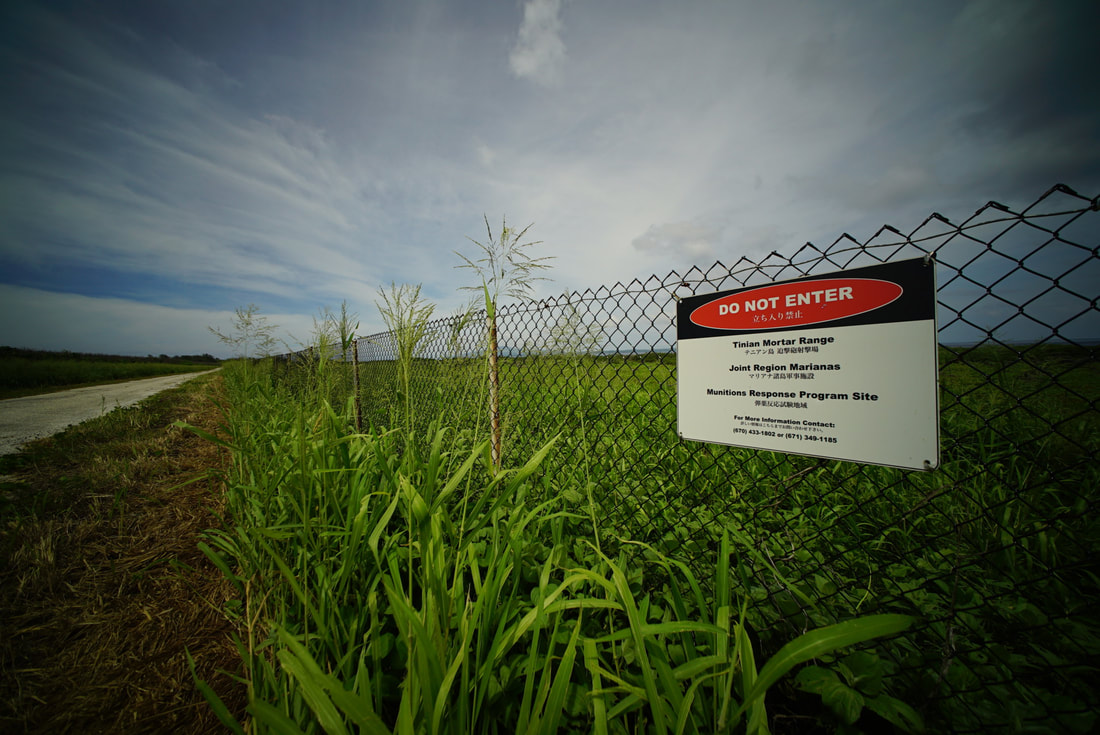 Munitions Response Site (MRS) Tinian Mortar Range (TMR) was part of a World War II (WWII) battlefield and was subsequently used as a military training range from 1945 to 1994, where 60-millimeter (mm) and 81 mm mortars, 40 mm grenades, and small arms were fired. MRS TMR is located approximately 7 miles northeast of Tinian's main village of San Jose, on the northeastern shoreline of the island. The site is immediately east of the former World War II (WWII) North Field runway complex. The TMR property is fenced, has approximate average dimensions of 5,300 feet (north-south) by 850 feet (east-west), and covers approximately 94 acres. The remedial investigation boundary extends past the TMR fence line in all directions to evaluate whether these site boundaries need to be expanded.

In 1983, a 50-year lease agreement was signed, giving the Department of Defense (DoD) control and possession of the northern two-thirds of the island of Tinian, which is known as the Military Lease Area (MLA). The MLA comprises of 15,992 acres that are divided into two parcels: the Exclusive Military Use Area (EMUA), which occupies 7,577 acres in the northern portion of the island. Although the TMR is located within the EMUA, which serves as a primary non-live-fire military training site, the MRS is clearly identified on EMUA documents and maps as a "No Training Area".

Because a variety of historic features and natural recreational sites are located within this area, the EMUA is open to public access when training exercises are not in progress (DON 2015a). From the eastern side of the island, the EMUA is accessed via Broadway, which runs through the investigation area. There are currently two unpaved access roads off of Broadway that lead to recreational areas within the investigation area. These recreational areas are frequented by residents and tourists. The access road at the north end of the site is just north of the TMR fence line, and leads to a blow hole along the cliff side. The second access road is located near the southern end of the investigation area, just south of the TMR fence line, and leads to Chiget Beach. In 2014, a berm was constructed across this road at the intersection within Broadway to inhibit access to the beach. (Remedial Investigation Work Plan for Munitions and Explosives of Concern, Munitions Response Site Tinian Mortar Range - UXO 00001; Tinian, Commonwealth of Northern Mariana Islands - August 2017).

In May and June 2014, a Site Inspection (SI) was performed for MRS TMR. During the SI, a MEC and MC Investigation was conducted over 3.5 percent of the MRS's total area, identified at the time as approximately 89 acres. The MEC Investigation was conducted using "transect reconnaissance" of 54 equally spaced, east-west transects. Due to rugged terrain along the coast, the reconnaissance only covered the western portion of the site. During the SI (DON 2015a), 61 observations were made of munitions-related items including:

​
The SI also identified potential target areas and a potential small arms target berm. These features, and the density distribution maps of potential MEC and MPPEH items generated during the SI, are displayed on Figure 3.

During the SI, twenty discrete surface soil samples (18 primary and 2 duplicate samples) were collected and analyzed for metals, and explosives. Project Action Levels (PALs) were exceeded for several metals. None of the tested explosives compounds were detected above PALs. See the RI WP for MC for additional details about soil sampling results (DON 2017).