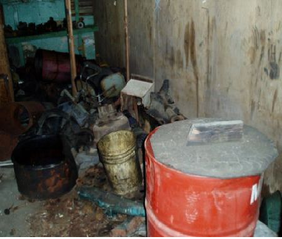 The subject property is identified as the Mayor’s Old Office Building, Saipan. The site consists of a 0.75-acre parcel of developed land, which contains two buildings. Bill Concepcion (D&A) has confirmed that the facility is now the heavy equipment shop for the Office of the Mayor of Saipan (MOS) and was previously used as the Mayor of Saipan's Office Building. No dates of operation for the Mayor’s office or any other prior businesses were found nor were documents available for review. The facility is actively used as a maintenance yard, machine shop, and storage area for junk vehicles. The site also contains a gravel parking area. Access to the site was granted by staff personnel from the Office of the Mayor of Saipan.

A 2,000-gallon AST containing water and a 1,000-gallon AST with unknown contents were observed at the time of the site reconnaissance. No evidence of staining or soil discoloration was observed around the mobile AST. The machine shop area contained various parts, tires, empty and full 55-gallon drums, likely used for storing equipment oil. Some staining was observed on the ground in this area. An empty drum storage area was observed near the tool shed. These drums did not have lids and appeared to be used as trash cans as necessary. No pits, ponds, lagoons, junk cars, dumping, asbestos, transformers, lead, or UXO were observed at the site. No stressed vegetation was observed at the time of the site reconnaissance. (Brownfields Site Survey and Inventory, 2005)