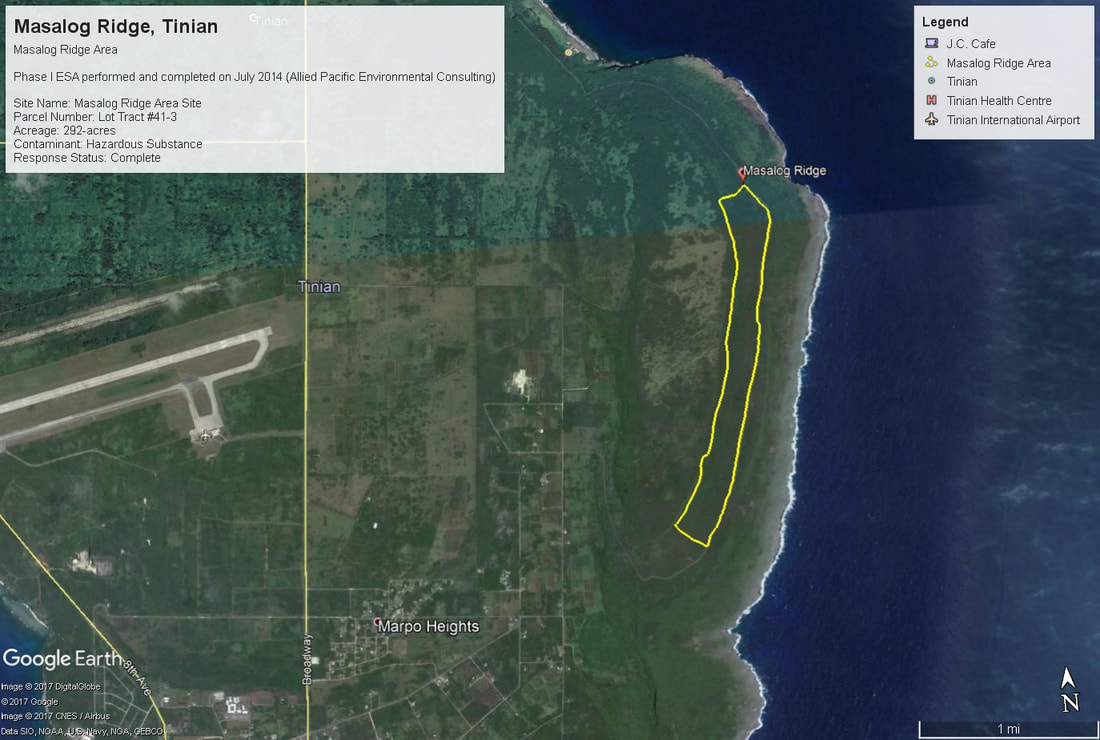 The size of the area of interest is about 292 acres, which is part of a largest ordnance storage depot located in what is known as the Masalog Ridge Area, Tinian. The US Military used the site immediately following the capture of the Mariana Islands in World War II to stage ordnance for aircraft, especially B-29 Bombers for the invasion of Japan. The ordnance storage area was extensive, consisting of over a hundred open revetments with unknown number of ordnance scattered throughout the area.

These unexploded ordnance (UXO) and potentially other WWII vintage explosive components present a significant health hazards to general public. The site has remained idled and undeveloped since after its use as an ordnance storage depot.

The 292 acre Masalog property is owned by the Department of Public Lands (DPL), compromised of Lots Tract 41-3. The site is located approximately two miles northeast of San Jose Village and approximately two miles of the Tinian Airport runway. The property is a narrow strip of land in which curves along the shoreline on the east of and along the Pina Plateau. The lands slopes generally southward from an elevation of approximately 350-360ft. above sea level to sea level at the top of the plateau to approximately 180 feet above sea level on the eastern border of the property. The majority of the coastline is comprised of cliffs approximately 30ft. high. There are two sandy sections of beach. At this time, the property is undeveloped and heavily vegetated.
Category: Brownfields
Coordinates: N-14° 59' 46.939" ; E- 145° 39' 57.690"
Island: Tinian
Village: Masalog Point
Response Status: November 26, 2008, AMPRO LLC conducted an Unexploded Ordnance (UXO) Survey for the Department of Public Lands to help identify potential site to relocate the public landfill facility. The proposed site happened to be an area used during World War II as an Army Air Corp ordnance storage facility in support of the North field B29 flight operations; Phase I ESA completed on July 2014;, Phase II ESA in 2015.
Institutional Control: None
Responsible Party: Undetermined
Enforcement Authority: Division of Environmental Quality
Project Lead: Division of Environmental Quality
Property Status: Public Lands
Date Entered into Public Record: August 19, 2013