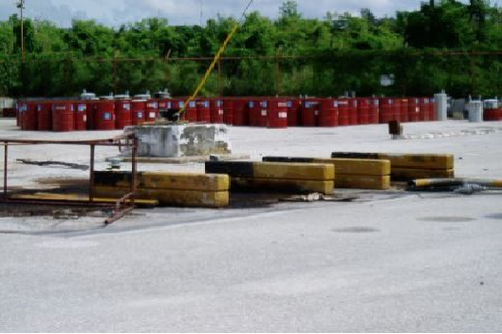 The subject property is a 2,720 sq. meter portion of Lot 028 K 09, known as Isley Field. It is located on Continental Drive in I Fadang (Airport), near the Saipan International Airport, on the southern part of the island of Saipan. The site is bordered on all sides by the remainder of Lot 028 K 09, the Commonwealth Ports Authority (CPA) property. The areas surrounding the subject site are primarily used for airport related industrial use, including the MOBIL Aviation Fuel Depot, Continental Cargo, CTSI Logistics, FedEx, Freedom Air Airport concourse, the Saipan International Airport concourse, the Airport Tower, and the CPA Incinerator. The Saipan International Airport runways are located 720 meters to the south. A stockpile area used to store excavation material from the nearly completed CUC Reservoir is found approximately 30 meters to the west of the site. The CPA Buried Drums site (a potential Brownfields site, with buried drums of unknown content) lies directly below the stockpile. The nearest residential area is roughly 500 meters to the east, in Dan Dan.

The subject property is rectangular (48 by 55 meters), asphaltic concrete paved and is enclosed within a gated chain link fence. The site is currently used by the Commonwealth Utilities Corporation to store drums of new and used oil utilized at the CUC Power Plants 1 & 2, a derelict generator, two large ASTs (one bermed, one not), open drums containing petroleum contaminated fill material, and several PCB-containing transformers and drums that appear to be leaking. Site inspections conducted (independent of this Phase I ESA) in 2005 and 2006 recorded a very large number (over 200) of transformers stored on site. The majority were non-PCB containing, but some containing PCBs and others were unlabelled. The number of transformers stored on site has been greatly reduced since then. A large surface stain in the northeastern part of the site is clearly visible in the 2005 satellite image.